Posted on August 8, 2016 by Dwayne Myers in Fund Raiser 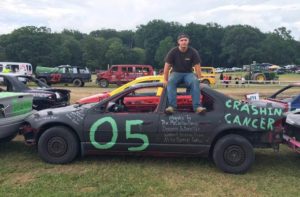 Cancer has no compassion, no pity, no conscience and no mercy. It will attack the body causing damage that is life threatening leaving many unable to work, with a diminished quality of life, in pain and unable to survive. The treatments for cancer can be as damaging as the disease itself but is needed to vanquish the disease from one’s body. Treatments like Immunotherapy, Chemotherapy, Radiation and Surgery can leave a person unable to work causing other problems like financial hardships. One local family that experienced this personally decided to make a difference to help others in this fight.

The Burchett family or Team Burchett knows the devastating effects of cancer living through it themselves. In honor of husband, father and firefighter Robert Burchett, who was diagnosed with Cholangiocarcinoma, a liver bile duct cancer, started a mission to raise funds for local cancer patients that are unable to pay their bills. They witnessed firsthand the struggles many cancer patients went through seeing it in the hospital themselves when Robert was being treated or Roberts’s wife Patrice as a career paramedic in Cecil County. Using the Cecil County Fair’s Demolition Derby as the venue, Team Burchett devised a means to raise funds for others.

Their plan was to find 2 cars to run in the derby in hopes to raise sponsorships for the fight and a dream of winning the big prize as champions of the derby.  Getting the two cars was the easy part. Now the team had to spend countless hours stripping them down to make them safe to compete. Promotions were used to get people involved and to learn more about their cause. They spent months getting ready for the big event and sure enough Mother Nature threw a twist and made sure on the day the cars would run, they would run in the mud.

The first heat was run in the afternoon and Tyler Burchett, son to Robert and Patrice, drove the 05 car. The field had 12 entries and the beating and banging began as soon as the clock reached zero. Driving a stripped down Plymouth Breeze, donated by Dynamic Automotive, Tyler was quick to make it known he wouldn’t get knocked out without a fight. After ten minutes of metal smashing and tires smoking the rain came and the field of dirt became a bowl of mud. Equipped with two flat front tires Tyler was able to survive until his car got stuck in the mud. Finishing 5th overall in his heat, he placed well and showed a strong finish for Team Burchett. 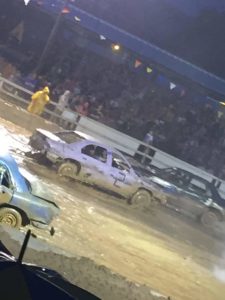 h to get the second heat, driving the #2 Chevy Lumina, which was donated by Skip McClellan, a regular Derby participant. It had rained hard all afternoon and 6 inches of rain had fallen in a short period of time.  The concrete barriers were holding firm, filled with Mother Nature’s gooey, slippery, sticky, mess of a derby track. In this heat you didn’t have to only worry about an opponent knocking the radiator out of your car, you also had to worry about what would fly in and smack you in the face. Derby cars have no windshield or glass so the driver only has a pair of goggles to protect their eyes. A quick spin could leave a driver blinded for a few precious seconds leaving them vulnerable. Even with a stacked field of 16 cars, Patrice was able to handle a crowded field, mother nature and her own emotions to get a 3rd place finish!

Although Team Burchett did not win the top prize their venture is considered a success. They raised awareness with their campaign by getting the word out that there are people in need and anyone can help. They raised over $1600 that will help those that have felt the sting of cancer in their world. Furthermore, it was a celebration of life, as Robert has beaten all odds and is still fighting the fight. Given a 6 month window to live Robert just passed the 3 year mark and has not given up hope. This event, this fund raiser and this family gives everyone hope that miracles are possible and to never give up. That commitment and confidence in life is the strongest weapon we can have so we don’t give up. Team Burchett!!! No one fights alone!

We’d Love to Hear From You

Under this optional tire road hazard protection plan, Dynamic Automotive will provide additional coverage to any tire purchased & installed by Dynamic Automotive, against tire failures caused by road hazards such as nails, screws glass, or almost anything else that could puncture a tire during the course of normal driving on state or county maintained roads.

The tire road hazard protection plan is valid from the date of purchase though the tire manufacturer warranty or when the tread depth reaches 3/32 of an inch, regardless of the age.

In the event that your tire(s) should fail due to a road hazard, our tire road hazard protection plan will repair the tire free of charge.

In the event the tire(s) is not repairable, the tire road hazard protection plan provides a credit based on the remaining usable tread at the time of failure due to a road hazard.

Credit is determined by the remaining usable tread multiplied by the current price of the tire. “Usable tread” is defined as the original manufacturer tread depth minus 3/32 of an inch.

The tire protection plan will be void if any tire is repaired or modified in any way by a person or party other than Dynamic Automotive.

This road hazard protection plan does not provide compensation for inconvenience, consequential, and/or incidental damages and does not replace, extend or modify the manufacturers’ warranty, and/or that the tire(s) sold and installed by Dynamic Automotive cannot fail.

To keep the Tire Road Hazard Protection Plan active. The purchaser must
rotate and balance the tires per vehicle and/or tire manufacturer guidelines.

What is not covered by the Tire Road Hazard Protection Plan:

Use our app to send us pictures and any funny sounds you hear, ask the mechanic a question, get VIP coupons & rewards, get a tow truck and use My Garage to keep track of your car’s maintenance.